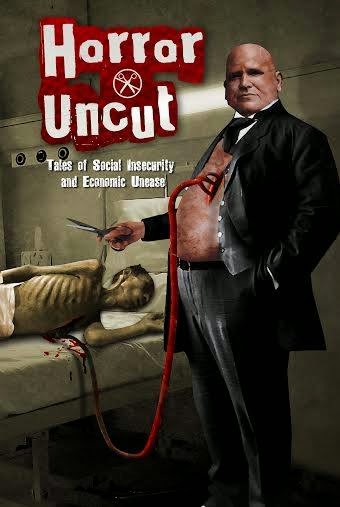 The politics of austerity are intrinsically connected to fear. In order to redirect anger at worsening living standards in the wake of the economic crisis, scapegoats continue to be identified and persecuted. The current rolling back of the welfare state is justified by politicians stoking outrage at benefit fraud while a largely complicit media distorts the extent to which this actually occurs. Cuts to public services are combined with sanctions for those out of work, raising unemployment while also demonizing the unemployed as a morally reprehensible underclass. Twisted Tales of Austerity will explore how the Gothic can critique the current mainstream political consensus surrounding poverty and the welfare state.

Join us for readings by authors from Horror Uncut: Tales of Social Insecurity and Economic Unease, a horror anthology for our hard times, followed by a panel discussion and Q&A. Co-editor of Horror Uncut, Tom Johnstone, claims this anthology ushers in a ‘new era of socially engaged but entertaining and darkly funny horror fiction, which may not change the world but will, I hope, change the way we look at it’. From supernatural body horror to systemic acts of cruelty, this event will both challenge and entertain.

Authors:
After reading stories about the dismantling of the NHS by the late Joel Lane in the magazine Black Static and The Fourth Black Book of Horror, Tom Johnstone suggested they collaborate on an austerity-themed anthology. The result was Horror Uncut (Gray Friar Press), the first book Tom has worked on as an editor. Tom will be reading the story that inspired the anthology, Joel’s ‘A Cry for Help’, which offers a darkly satirical representation of someone complicit in the privatization of the NHS.

Laura Mauro’s ‘Ptichka’ offers insight into the devastating consequences of anti-immigrant rhetoric, tying the isolation and alienation created by government policy to a very intimate tale of pregnancy and body horror.

Rosanne Rabinowitz’s ‘Pieces of Ourselves’ starts with a demonstration against austerity that builds to violent kettling by the police. One activist escapes with a light wound, but his growing anxiety manifests in the transmogrifying skin that peels away from it.

Tickets can be booked here.

Facebook event page can be found here.
Posted by David at 13:01