THE HOUSES ARE QUIET. IT IS THEIR RESIDENTS WHO ARE SCREAMING...

Simon Kurt Unsworth reinvents the classic English ghost story with a portmanteau collection that takes the haunted house genre and makes it scream...quietly.

Because the most terrifying screams are the silent ones. 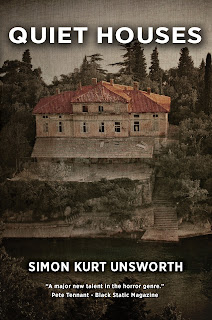 “No-one could be that unhappy and be alive...” A chambermaid’s seemingly innocent request is granted, an act of kindness that has dire consequences for a guest at THE ELMS, MORECAMBE...

“I wish I had been right; I wish that it had been a man, or death alone, that had found her...” An unearthly light in an abandoned bungalow resolves the mystery of a missing child, but no human force has taken her. An entity that fishes for children is in THE MERRY HOUSE, SCALE HALL...

“Go beyond the graves, and they will come to you.” An invitation to a clifftop graveyard leads to a harrowing chase by things that remain unseen, their hunger unknown and never satisfied, BEYOND ST PATRICK’S CHAPEL.

“The great delight in being part of the Save Our Shit crew was that sometimes they could persuade those designers of the present and the future to save or incorporate the past into their designs.” In THE OCEAN GRAND hotel, work is underway to upgrade the building but something is stalking the workers...

“Something white came out. Something white, screaming and screaming...” Jobs fit for heroes, they were promised after the Great War. They were given something else in THE TEMPLE OF RELIEF AND EASE.

There is a hidden agenda to paranormal researcher Richard Nakata’s investigations into these houses. A commission that witnesses cattle lowing in the cowsheds of STACK’S FARM long after they’ve been slaughtered, and a reckoning in the showhouse of 24 GLASSHOUSE, as he and his colleagues pay the price for creating their own ghost...

To find out more about Simon Kurt Unsworth visit:
http://simonkurtunsworth.wordpress.com/
To pre-order Quiet Houses visit:
http://darkcontinents.com/2011/09/20/quiet-houses/
Posted by Glyn at 10:10