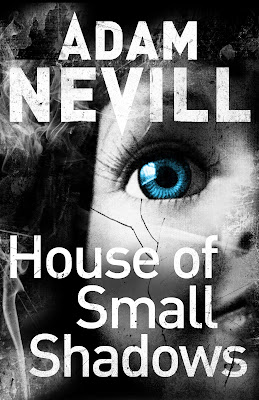 Twisted Tales have teamed up with Pan Macmillan to offer you the chance to win one of ten copies of Adam Nevill's latest novel, House of Small Shadows. To enter, simply send your name and address to twistedtalesevents@gmail.com with the subject line 'House of Small Shadows Competition' by Friday 4th October 2013. Winners will be announced on the blog the following week and their details sent to the publisher to mail out directly. International entries are very welcome.

More on House of Small Shadows:

The Red House: home to the damaged genius of the late M. H. Mason, master taxidermist and puppeteer, where he lived and created some of his most disturbing works. The building and its treasure trove of antiques is long forgotten, but the time has come for his creations to rise from the darkness. Catherine Howard can’t believe her luck when she’s invited to value the contents of the house. When she first sees the elaborate displays of posed, costumed and preserved animals and macabre puppets, she’s both thrilled and terrified. It’s an opportunity to die for. But the Red House has secrets, secrets as dreadful and dark as those from Catherine’s own past. At night the building comes alive with noises and movements: footsteps, and the fleeting glimpses of small shadows on the stairs. And soon the barriers between reality, sanity and nightmare begin to collapse . . .

twistedtalesevents@gmail.com
Posted by Twisted Tales at 09:58